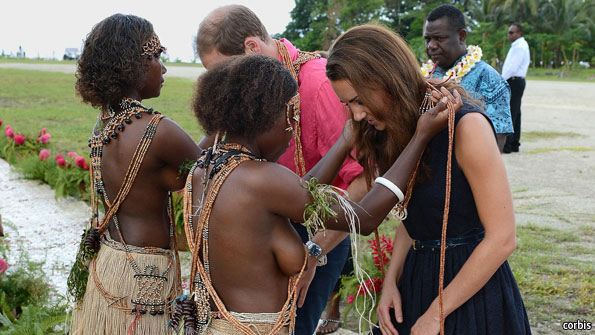 THERE were a lot of breasts on show when the Duke and Duchess of Cambridge were welcomed in the Solomon Islands as part of their tour of the South Pacific, but none caused as much of a stir as the single pair that appeared in Closer, a French magazine, on September 14th. They were photographed while the duchess was sunbathing with her husband at a private villa in France; and their exposure in the magazine led to legal action by the couple to suppress the pictures.

The action was only partially successful. A court banned further publication and required the magazine to hand over the originals, and the police raided the magazine’s offices as part of an investigation into whether French privacy law had been broken; but the pictures have been published in Italy, Ireland and Sweden—and, through the web, all over the world. Yet although the episode shows how technology undermines privacy, it also illustrates the ways in which life has got harder at the scummy end of the news business.

Better lenses help paparazzi take pictures such of those of the duchess, who is reckoned to have been photographed from around a kilometre away, and digital technology helps them get the product to the customer. Camera phones have made possible pictures such as those of a naked Prince Harry that appeared on the internet last month. Yet digital technology also threatens the livelihood of paparazzi, for it turns everybody into a photographer and, by ensuring instant, free, global distribution, reduces the photos’ value.

The internet has also damaged the fortunes of the paparazzi’s main paymasters, the newspapers. The circulation of the Sun, Britain’s biggest-selling tabloid, has dropped to 2.5m from 3.7m ten years ago. And the circulation boost from publishing scandalous pictures is limited. The Prince Harry pics brought the Sun only an extra 120,000 sales. “The internet has ruined it for everybody,” says Jack Ludlam, a London paparazzo who has moved to Spain.

Photographs of the right person can still fetch serious money. Nobody knows how much the photographs of the duchess were sold for, but Max Clifford, a publicity agent, reckons that, were it not for the French ban, he could have got £1m ($1.6m) for them. However, regulatory action is an increasing hazard these days—particularly in Britain, which is no longer the booming market that it once was.

The sanctimonious hypocrisy of the British tabloid reaction to the pictures of the duchess is presumably born of frustration. None of them dared touch the pictures as a result of both public pressure and threatened regulation. The revelation that the News of the World hacked the phones of people it was writing about has diminished already limited public affection for tabloid papers and condemned them to the embarrassment of a public inquiry, headed by Lord Justice Leveson.

They are therefore on best behaviour. The Sun published the Prince Harry photos only after they had been on the web, and argued that they were “a crucial test of Britain’s free press”. Richard Desmond, owner of Express Newspapers, who made his money with titles such as Asian Babes, has threatened to close down his Irish Daily Star, which published the pictures of the duchess. “It’s much easier to stop stories these days,” says Mr Clifford, “Stories which ought to be coming out, in the public interest, aren’t.”

The British tabloids’ self-righteousness may not outlast the Leveson inquiry into press behaviour. But by then they may be subject to fiercer regulation. It’s tough at the bottom these days.